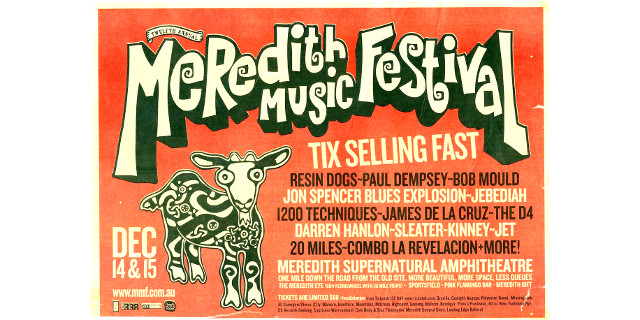 The best festival this country has to offer. Meredith Music Festival lived up to the hype yet again with its fine selection of music, beautiful weather, ice cold beer, good food and fun times had by all.

With the addition of Friday night activities to the festival my annual Friday arvo drive from Melbourne to Meredith, meant that I could actually get into the site this year and not get sloshed at the Meredith pub with locals.

After a couple of pre-game soothers at the pub I cruised down to the new and improved site (which somehow managed to top the old site in its layout, and still had the same ‘Meredith’ aura about it),grabbed an esky full of cold ones and parked my arse on the hill for the evening.

Hoss kicked it all off for the die-hards and got everyone into the groove with a chunky guitar assault. Awesome sound, good tunes – some old and some new – and Joel Silbersher still has one of the best gravel rock voices in the country. Always a pleasure to witness. The Sailors followed with their homoerotic version of things. Still laugh everytime I see them; crude, crass, wrong, whatever, it’s a fun novelty type of thing that gets you. ‘Dr.Creep’ is still my personal fave.

Snout’s second ‘last ever show’ was magic as the sun set. With Ross opening solo, then introducing his brother Link ‘Meanie’ on as guest guitarist, they got into to what they did best, edgy pop/rock songs done to perfection. Still catchy, still quality, they will be sorely missed by many music lovers.

Missing a bit of ‘vibe’ due to my seat on the hill, I decided to get a closer look at Dallas Crane as it became dark. The aroma in the air at the front of the stage (and everywhere for that matter) was nothing short of ‘green’ to say the least, so after a few inhaling breaths I was ready.
This was one of the best things I have witnessed at a festival in the 8 or 9 years I’ve been going to such things. Up there with Magic Dirt’s drunken 2am performance at The Falls many years ago.

These guys have absolutely brilliant catchy songs, great stage presence, and simply know how to rock when they gotta, and pull it back when necessary.

The balance is fantastic. Some pretty good newies mixed in with some ‘classic’ oldies. ‘Sold Me’ and the crowd fave ‘Sit On My Knee’ were highlights. Walked away feeling pretty good after that little gem of a show.

Everything seemed to be of high standard so far (kudos to the organisers), and knowing what Dead Moon were capable of later on, The Fauves had to put in a blinder. Unfortunatley they didn’t. I was pretty quickly dragged down by the back of the head from my high perch to the low nether regions of the dusty Meredith surface.

They simply just failed to deliver. Years ago they were pretty good act to witness, but not so much anymore. The Doctor is always a pleasure to watch, but that was about it. Plenty of Fauves faithful had gathered and cheered them on regardless of what I thought, but, sorry faithful the time is nigh.

The best thing about their show was watching bass player Ted deliver his ‘hilarious without knowing’ rock star antics. Wonder if he’s aware of how funny he is.

It was time for some seedy old garage rock via Dead Moon. Fucking brilliant. A perfect way end the night. They swaggered through over 60 minutes of hard yakka, showing the young upstarts how it was done. They’ve been doing for years and yep, it shows alright. Not just the fact they look like they belong on the couch next to my grandma, but they manage to make loose garage trashy rock sound polished. Something so many bands fail at doing.

Staggered back to the car passed out waiting to rise to do it all over again.

On any other given Saturday morning if you saw a truck load of people throwing down a few beers at 10am, you would probably think to yourself “fuck, that’s a bit rough” but this wasn’t any given weekend. This was Meredith.

Waited for a few companions to finally join me for the weekend then went to see Jet kick off the day’s proceedings. Having never seen them before but read a shit load of dribble about them, the pressure was on. Sound checked in front of thousands then just started playing. No big entrance, ala Warped last year, just a kicked back ‘whatever’ type of entrance. I don’t know their songs but they rocked along smoothly, with a few little gems tucked away in thier set. The boys looked at ease with their whole ‘over-hyped’ situation, not really caring for much just doing what they did. Great songs held together with three pretty good voices, they deserve to be witnessed by the masses.

But one very amusing distraction was that of their manager turned roadie. Daggy looking bum standing on the side of the stage going absolutley bonkers by the last few songs. He kept creeping into vision before he almost became the infamous fifth member he was that close. Itching at the bit to get out there, he was their ‘puppeteer’, mocking every word & every move. By the end I couldn’t take my eyes off him he was that funny, and it seemed everyone else around me couldn’t either.

Whilst this is a fucking funny thing to witness, it took the attention off Jet themselves which was a shame. Whilst it’s good to see a ‘roadie’ be into his employers for once, a few more steps back off the stage would probably give the band the appropriate spotlight. He should’ve entered the air guitar championships.

From rock to hip-hop, TZU hit the stage with their Oz-flavoured stylings. Improvisation was brilliant, how do people think so quickly? Good time fun group, that was needed to break up the rock saturation. Thumbs up.

Fuck it was getting hot by this stage, but that didn’t stop The Drones from continuing their hard slog. One of the best bands Melbourne has to offer, but to think they actually belong to Perth, is hard to swallow. They tend to send a little chill down the spine everytime I catch them. With their Beast Of Bourbon type sounds, the fender-esque guitar wails obnoxiously throughout the ampitheatre and grabs peoples attention as it should. Magic.

Retreated under a tree for Darren Hanlon and found it good to lay down, shut the eyes and grab a quick rest to the soothing sounds that he gave us. Felt nice and cool, would go hard and sweaty later.

The Yeah Yeah Yeahs were tidy but not enough to get me back up the stage front, enjoyed it from a distance, it was going to take something special to get me away from shade and an esky full of piss on this fucking extremeley hot day.

The D4 did it. More hyped Kiwi rock who I hadn’t seen since their first trip out here a couple of years back. These guys are ‘party-rock’, get down, shake it around, lose yourself stuff. Got me charged again. Their song ‘Party’ went down a pisser with everyone.

1200 Techniques and Sleater Kinney were missed because I was off refilling and re-rolling to get me through the night. Apologies to them both.

Stood up the top of the hill watching a fucking awesome sunset to the sounds of Paul Dempsey. Soothing voice, nice mellow tunes provided a perfect backdrop and relaxation for the rest of the evening.

It was time to dance as Combo La Revelacion came forth. People piss-bolting down hills, out of hibernation, for the annual jiggy. They didn’t disapoint either, kept it up for almost an hour. Icould of wiggled my arse to that for another hour – a fine tradition indeed.

Jebediah put in the hard yards and were rewarded with a pretty good response from everyone. I even didn’t mind the nasal annoyance I’ve found in previous findings of them. Catchy radio hits are always good to sing along to.

The time had finally come for what I was waiting for all weekend: Jon Spencer Blues Explosion. Got up the front and rocked along to this one off band. No one else could even try and pull off what this guy does. He is one smooth motherfucker and shows us all how cool he is. By this stage though, to put simply, I was fucked, both mentally and physically.

I wish jon Spencer and Jebediah had traded places so I could have witnessed more, but to my own shame in the morning, I had to bail. Once again Meredith had claimed my wicket, clean bowled. But I made a big score.

Sunday was fucked because I was fucked. It was 307 degrees, my arse was on holidays (thanks to a late night Hare Krishna feed) and I could go no further. Got a quick glimpse of 20 Miles who were awesome. Judah Bauer fronted up after his Blues Explosion show in fine fashion. Those still there witnessed something pretty darn special, but it was time to go and grab a feed from the Meredith pub, sit in some shade with a hair of the dog before the journey home.

I hope he who won the Meredith Gift did it well. Apologies to those who I missed (I know you’ll care!) but Aunty Meredith is one powerful bitch who knocks you ’round like a two dollar whore. Can’t wait to do it all over again at the best festival this country has to offer.

Ed note: Yeah, we’re late editing and posting this. It’s Christmas, what do you expect?