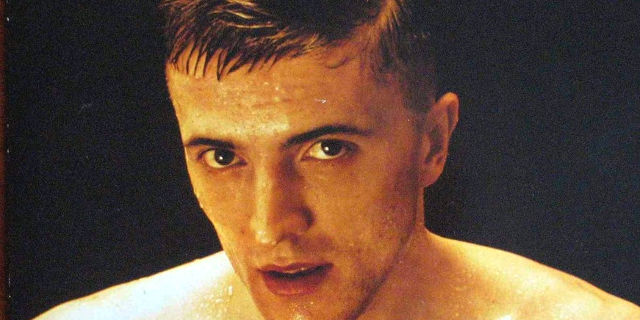 DAF were a Neue Deutsche Welle (New German Wave) band, covering the time from when NDW meant hideous post-punk noise to when it meant cheesy pop. Funnily enough covering a similar arc themselves.

The sound (of the good albums) is a Korg MS-20 running off a 16-step sequencer, Robert Görl on drums and Gabi Delgado (a Spaniard, whose family moved to Germany to escape Franco) shouting in German and being a sweaty macho leather fag over the top. It’s precisely what you want in the repurposing of martial sounds, i.e. someone pointing and saying “dude, this is gay as hell.” This was just the ticket in 1981.

(The effect of such public non-swishy gayness is somewhat lost to history; DAF’s influence is these days generally stated only in terms of industrial. e.g. Nitzer Ebb or Front 242 look and sound very like DAF but never had much of a gay vibe ‘cos that’s just what industrial musicians looked and sounded like. However, DAF’s image was lifted directly for Frankie Goes To Hollywood’s chart-topping in-your-face outness, as noted in Rip It Up. And FGTH were the gateway for Bronski Beat’s earnest activism, and Bronski Beat for the Pet Shop Boys’ just quiet normative gay.)

They have been a towering influence over the entirety of industrial music since. If you know any song, it’ll be “Der Mussolini” and maybe “Sex Unter Wasser”. The other stuff is not such hit single material, but will give you the idea, e.g. “Der Räuber und der Prinz”, “Muskel”, “Mein Herz Macht Bum”, “Sato-Sato”, “Goldenes Spielzeug”, “Absolute Körperkontrolle”.

There are seven studio albums, three of which are worth bothering with: Alles Ist Gut (which was a huge hit in Germany, for some reason), Gold und Liebe and Für Immer. Get these three. Their 2003 second-reunion album 15 Neue D.A.F.-Lieder isn’t terrible but is not as good as the three whose memory it attempts to invoke. The first two albums they were just getting their shit together, and the 1986 first-reunion album is the one fans pretend never happened. Start with Alles Ist Gut, really.

Robert and Gabi don’t really get along, but they continue to take the show out on the road every now and then. Here they are a coupla months ago at Wave Gotik Treffen.