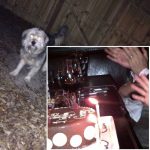 Möss is a recording name for Cody George. (That’s him in the picture.) I tripped over the third Möss album, In The State’s Eye, and was struck by the way he does with synthesizers on it something like what the Church did with guitars at their best: structure but a psychedelic feel. Though Möss feels much more close-to-home.

There are two albums before this, recorded over the course of this year. The self-titled one is a bit more straightforward than its successors, you should probably start there. Paradis is more guitary and seems more psychedelic. A lot of it’s more abrasive than you might expect while still in that context. (With “Headspin” taking a sudden turn into Depeche Mode before it’s back to the guitars.)

I emailed Cody to ask about the project. 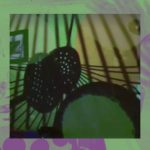 “As far as members, just one dude making the most out of cheap equipment. Few songs have sampled drums by myself, but mostly rely on sequenced drums.

“I started the project after being fed up with the inability to find a long term vocalist and decided to sing for myself. I had a few projects beforehand, a psychedelic lo-fi band with a female vocalist, short lived but dear to me. Möss is meant to be a collection of sounds that reminds me of my childhood in one way or another — which basically entails a tiny me wondering what the future means.

“It’s funny you would contact me now, because I feel as though the era of Möss is over. I’ve released three albums three months apart, the first being released in March. Cosmic, perhaps meaningless, but I’m a sucker for that kinda stuff.” 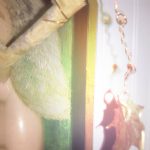 That’s you singing in the video? (“Nothing Matters”, from Möss)

“Yeah, sans mustache (I thought it’d be artsy at the time). That was just a fun get-together of friends. They weren’t paid if that was your next question. My bathroom is still stained red, green, and yellow.”

If this project is pretty much done, what’s next?

“I churn out music constantly. Every song is improvised so I can never play them live. I’m hoping the next project aims for the stage, but I really like Möss’ current sound. Why stop? Check back in another three months, there may be a fourth album.”