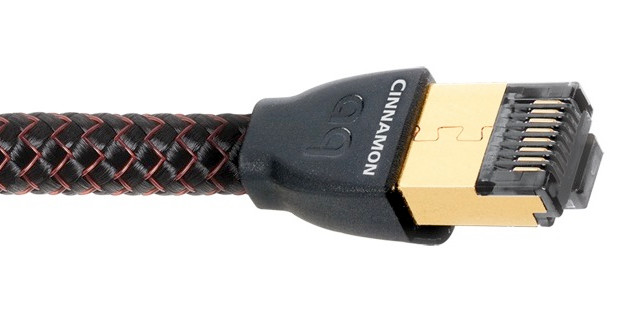 Not every flight of audiophile fancy can be as awesome as buying your own mains power transformer to make your Queen LPs sound better. But René van Es’ “Audioquest Pearl and Cinnamon Ethernet cables” (The Ear, 2 September 2013) is a minor poetic classic in its own way.

Now that streaming audio has usurped my CDs the time has come to “listen” to Ethernet cables.

He’s streaming CD rips to 16/44 FLAC from a NAS to a media player. You might think this was digital data, streamed to the media player as it needs it, at a rate one fourteen-hundredth the speed of the cable, with a buffer that’s maintained inside the media player. But you’ll be amazed at the effect of changing the cable:

The sound with the Pearl becomes lighter and has less impact and detail compared to the Supra. Stereo image shrinks, but more obvious is a reduction in detail. Changing to Cinnamon with only one switch in my network produces a surprising result. One Million Bicycles from Katie Melua’s CD Live At The O2 Arena opens up and suddenly the public plays a much more important role at the beginning and end of the song. The people were always there but with the Cinnamon they not only come alive, they are also more spaced out and more like individuals.

Like the organ that comes to the foreground, the whistle is now tonally richer and Katie’s voice is more exciting. Small recording errors that appear, for instance when Katie gets too close to the mic, add to the live experience.

Let none mistake this for imagination, delusion or just making shit up.

You’ll be pleased to know he’s up to speed on technology:

This file is a 16/44.1 FLAC file ripped from a CD, it should be very easy to transport on a Gigabit network. One step higher is a studio master from Cæcily Norby at 24/96. Which means that over three times more data has to be transported.

Because 24/192 certainly isn’t a jawdropping waste of bandwidth on an analogue tape recording from 1977. And his network cable only has room for another 199 simultaneous streams this size!

It is still surprising that Ethernet cables make a difference to sound quality. I didn’t believe it until I tried for myself.

In fact, I still don’t believe it.

You’ll be delighted to know the Audioquest Cinnamon is a relative snip at £79.00, and not the four to seven quid a perfectly good cable meeting the CAT-7 spec costs absolutely anywhere else. (Or about 20p if you crimp it yourself.)

I have been called a fool many times.

I wish I could write about actual music as soaringly as this guy writes about wires.

7 thoughts on “The time has come to listen to Ethernet cables.”