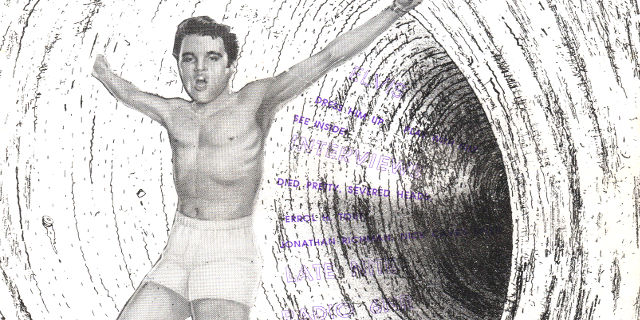 6NR Late Nite was a radio show run by the Curtin University of Technology student guild. Late Nite was one of the finest agents of musical corruption available to the youth of Perth in the 1980s, and certainly did wonders for me as a teenager: hearing sounds from who knows where coming over the AM airwaves, last thing at night.

In late 1986, they decided to do a magaziney fanzine thing (clearly inspired by my work on Party Fears) called Vortex, or ✪Vortex✪ if you used too many fonts. Most of the work was done by Anna Zanella, with contributions from everyone in range of Late Nite or Dawn Bailey’s Friday afternoon Australian indie show Sessions.

The financial basis is entirely unclear to me. They printed it on shiny expensive paper and the first two issues were given away free and later issues were $1. I strongly suspect they were just throwing money down a black hole and collecting the radiation of the resulting magazines.

It eventually stopped because (I asked her this some time ’88, ’89?) Anna didn’t think she could really have taken it much further. I spluttered at this, thinking just what I could have done with some sort of actual subsidy for my fanzining instead of attempting to pay for Party Fears out of my Austudy or dole … probably pretty much what I did, but with less angst and earlier computerisation.

Brad Lambert kindly scanned his collection a couple of years ago and sent me DVD-Rs of the lot. And nearly two years later, I have finally started putting them up. (Sorry Brad for the delay!) Issue 1 is up on the Party Fears World Service page, with issues 2 to 6 to follow.

If you have any other Perth indie press from back in the day, please send scans my way and I’ll put them up! (Yes, I’m particularly thinking of The Harvey. But there were lots of others.) And I’ll take less than two years about it this time, promise.

4 thoughts on “1986-87 Perth fanzine Vortex scanned and up on the Party Fears page.”