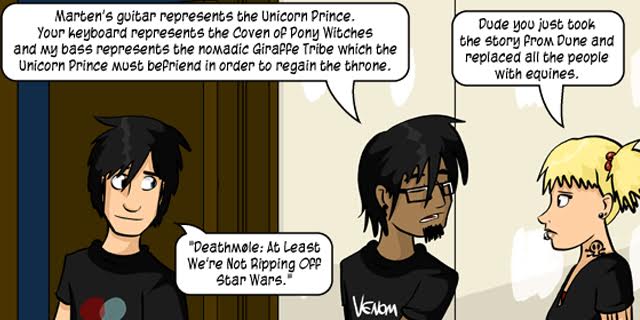 If you’ve ever had even a passing interest in webcomics you’ve probably run into Jeph Jacques’ work. Since 2003 he’s been publishing his internet sitcom, Questionable Content, and he’s dabbled in sci-fi comics, and has published a short series of existentially crushing stories about space robots.

When he isn’t writing about sad robots or getting sued by WalMart Jacques makes some truly excellent music.

On July 9th 2017 Jacques released an electronic album called “This was a mistake” under the artist name Hakase. The 8 track album is available on Bandcamp and it’s a great little piece of EDM/ambient – listenable if you pay attention but easy to ignore if you don’t feel like focusing. There’s not too much to say about it – it’s good music to have on in the background, it wouldn’t be out of place in a How It’s Made segment, but it also would be fun to dance to if you were at a mellow club or a chill pool party. “This was a mistake” feels very summery and light.

But that’s honestly not what I want to talk about, it’s just my timely excuse to bring up the over-the-top extravaganza of post-metal brilliance that is Deathmøle.

Deathmøle is a fictional band made up of characters from Jacques’ QC universe. The fictional band has real albums, all of which are written by Jacques. And, weirdly enough, they’re really fucking good.

Look, the first few albums are decidedly thrash-y. After that there’s a bit of a side-step into power metal for a few songs but by the album Permanence, which Jacques KickStarted to record professionally, the fake band has hit its stride and the music is transcendent. Because it’s all experimental, instrumental metal it kind of ends up being really, really heavy ambient right until a fat fucking solo drops itself on your heads and shreds its way into your heart.

I love Questionable Content, I’ve followed the comic since 2007, but I think it would be fair to say that Jacques is more impressive as a musician than as a cartoonist. The power in these instrumental albums is undeniable – they’re heavy, tense, and executed so well that they make you more aware of what a guitar can do.

Jacques has nine releases as Deathmøle, all of which are available on Bandcamp (and the full discography is currently discounted so get on it). Advances is my favorite album of the band’s offerings, but the remastered Present Peregrine is a thing of tremendous beauty.

If you’d like to sample Jacques’ musical work without bouncing through too many Bandcamp pages you can also check out his Soundcloud, which includes EDM tracks, metal and post-metal, a tiny bit of black metal, and just some playing around that sounds pretty cool. (But seriously “Lorazepam” is a great track, check it out.)