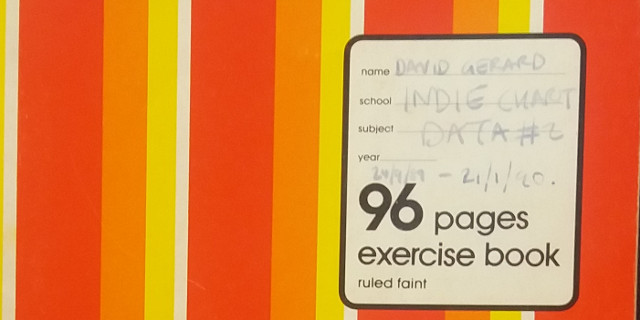 I’m moving house, and just found one of the notebooks I used to keep the Perth indie record chart in. It somehow faithfully followed me home, halfway ’round the world and thirty years later.

I kept the chart on behalf of public radio station 6NR to get it into X-Press, the local free weekly — using my good name as editor of Party Fears to get the shops on board. I think Marian Richardson arranged all of this in early 1989. I did the chart until March 1991, when I got a day job and Marian took it over.

The chart covered independent releases from Australian bands — anything not distributed by the six majors. (Remember when there were six majors?).

Every Monday morning, I’d call around five shops: Dada, 78, House of Wax, Mills and Monkey Music — covering both the main shop in town and Rob’s Record Bar. Usually from a pay phone at the University of Western Australia, where I was failing an engineering degree. I’d scribble down the band name, the record name and its sales, from each shop. Then I’d add them up, and call the chart into X-Press. 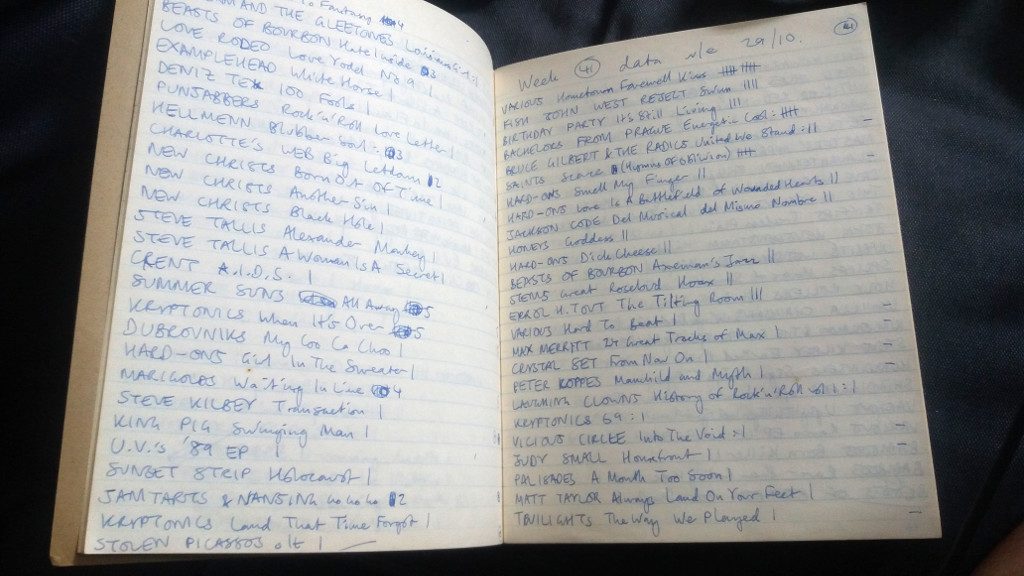 Fundamentally, it was an excuse to get Perth bands into a published record chart, so they’d get some publicity and could use it in their marketing. And to propagandise Australian indie to the masses.

(I don’t have any of my stuff from X-Press, and not any of these charts either. If there’s any hoarders out there …)

It certainly wasn’t anything within a mile of a statistically-valid survey. Most of these sold a single copy. The ten “biggest sellers” would typically include multiple tied entries, which I’d decide according to who’d sold more copies the previous week. Or the week before that. Proper corruption is painstaking work, you know. 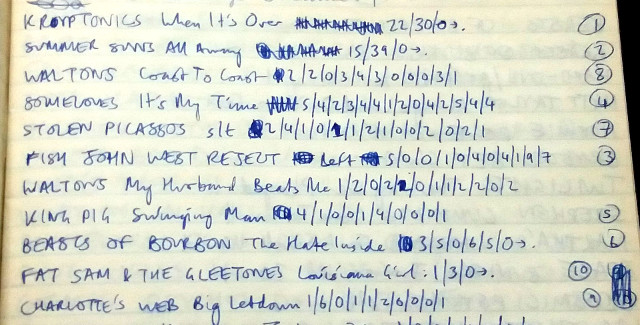 Some of the record shop people would have carefully tallied all sales over the week. Others would literally just make up numbers off the top of their heads, and I’d scale their claims to something that wasn’t ridiculous. (I won’t say who was doing which.)

I think the most any recording actually sold over its chart run was on the order of 200 copies — the biggest selling album of 1989 was 69 by the Kryptonics, which tallied 235. Here’s the rest of them, and the 1989 singles! 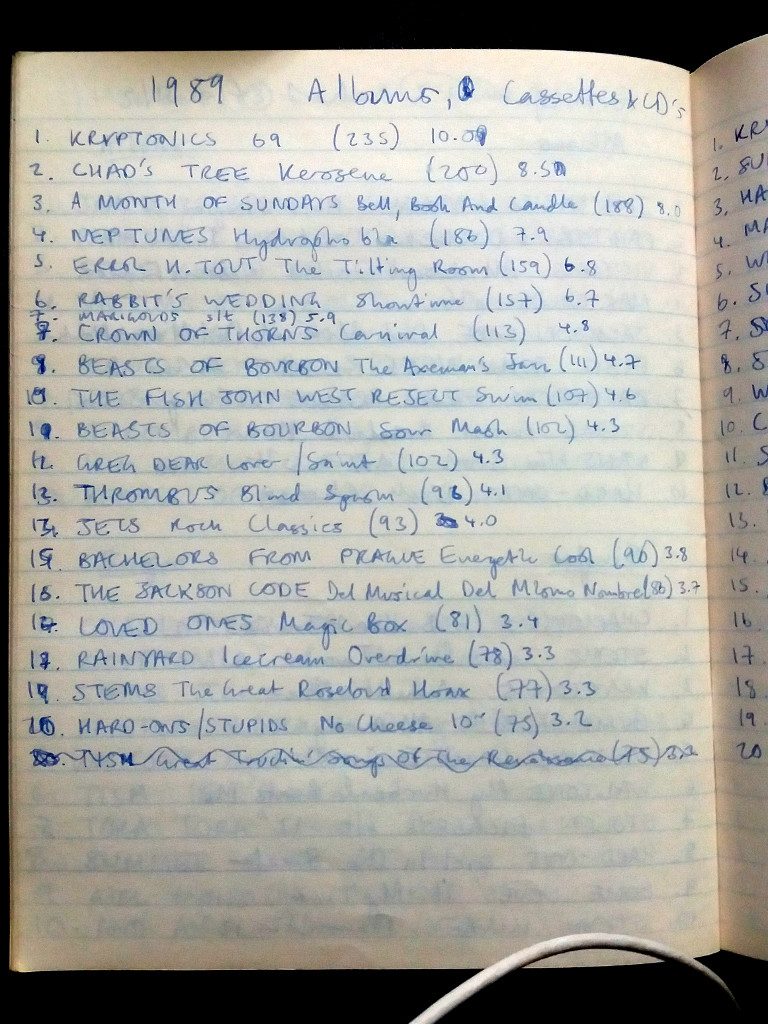 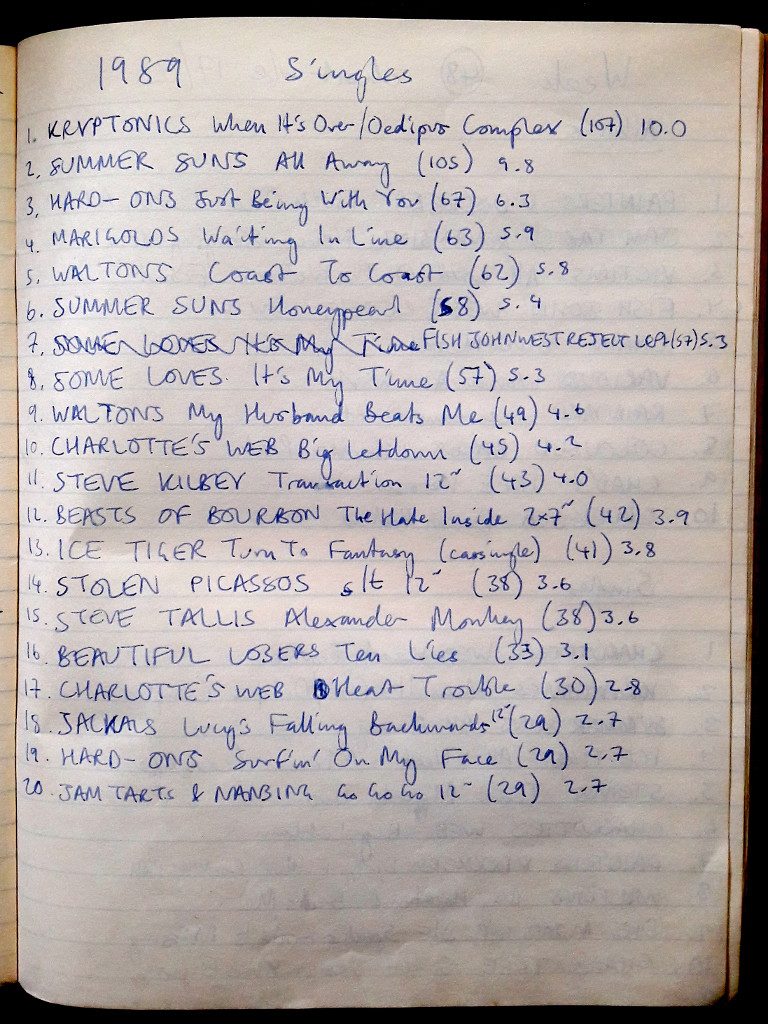 Other national indie charts worked to similar exacting standards. For the All-Australian charts in RAM, I recall [REDACTED] telling me how he’d watched [REDACTED] from [REDACTED] Records take the call and just reel off numbers as if he was reading from a nonexistent sheet of data in front of him. Putting some performance into the voice to sound real.

I’d be amazed if Marian bothered with any of this complicated faff when she did the chart.

Eventually, Michael Dwyer, then-editor of X-Press, decided he didn’t like the chart any more — it may have been just a bit too blatantly corrupt — and replaced it with just a list of local releases. Still, I like to think we fought the good fight to good effect. 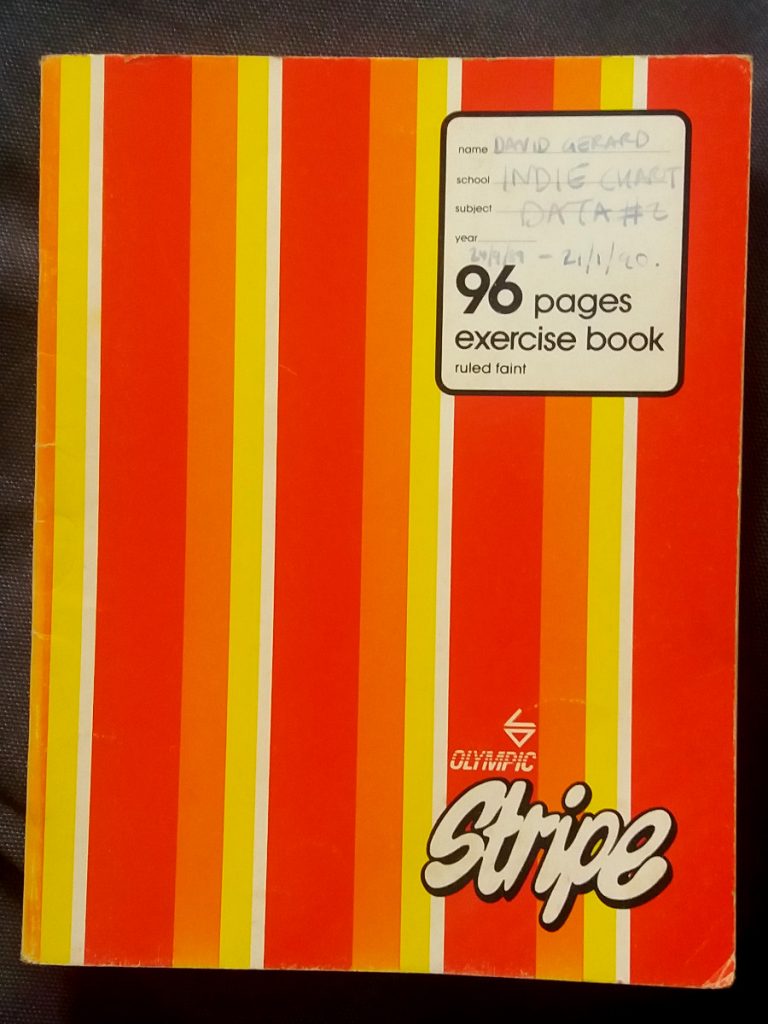 One thought on “I ran the Perth indie record charts, from 1989 to 1991. Corruption! Manipulation! Propaganda!”