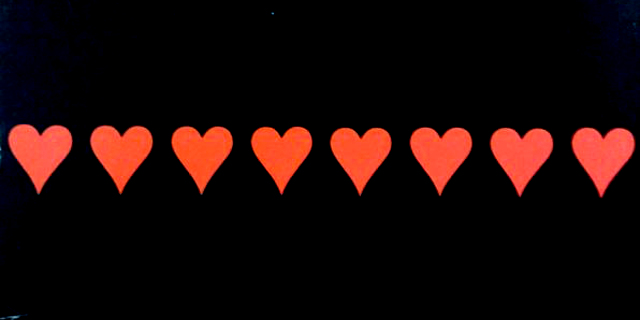 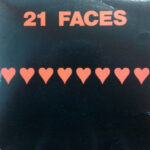 Well, this is an obscurity I never expected to hear online.

“Red Hearts” is a single from 1985 by 21 Faces, a Sydney band. It’s a record I really liked, that had zero impact and disappeared utterly without trace.

I was cleaning up a scan of B-Side #11, from mid-1985, which has an interview with the band by Andrea Solario, which I’ve pasted below: 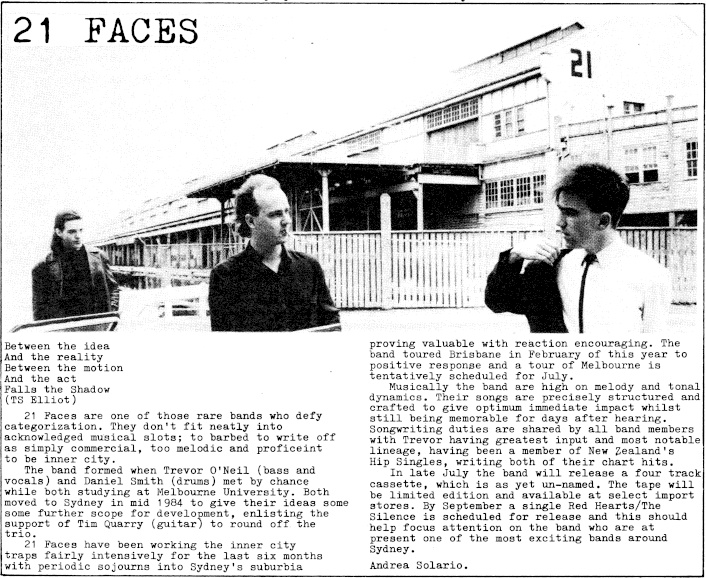 I saw the record in Dada and bought it off the back of the B-Side article from the year before — back before the Internet, you had to remember bands and records you’d read the name of once in passing, just in case you spotted them any time in the next decade — and was not disappointed. Here’s my review at the time, in Party Fears #4 (July–August 1986):

21 FACES: Red Hearts/Michelle’s In Love 7″ (Pagan RITE1) Came out end of last year, but time considerations are irrelevant ‘cos it’s so good. Sort of along the lines of UK-post-punk-early-80’s-mathematical-music (thanks Alex), very catchy, nicely put together and in fact (rave rave) rather marvellous. I discovered it in a discount rack, which is surely an atrocity.

(Jesus, how many adjectives did I hyphenate back then. I promise I’ve learnt to write a little better since. I remember Vince Valentini bought a copy off my recommendation and wasn’t impressed.)

So I have the 7″, but it’s in a box and I don’t have a turntable. But it was catchy enough to stick in my head, and some time in 2005 I thought “hmm, remember that song,” and it’s played in my head on and off for about the past fifteen or so years.

I did occasional searches for the song, in case someone had ripped it and put it up. I did such a search this morning after going through the B-Side scans, and discovered that someone from 21 Faces put up all their stuff on the Internet Archive just a few months ago!

Here’s “Red Hearts”. It’s not perfect, but it’s pretty good. And I assure you, it’s a catchy bugger. Here’s the rest of their stuff.