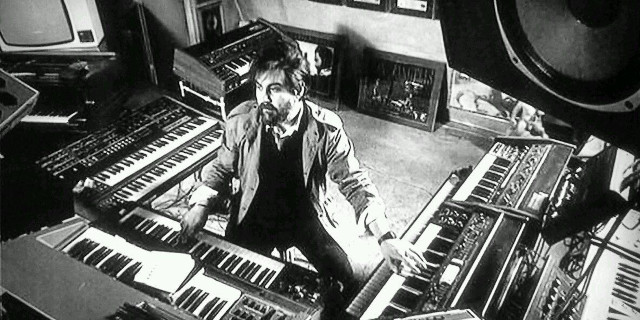 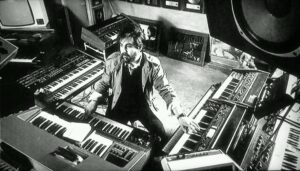 It seems to be all a little bit disturbing to write shortly after the death of Klaus Schulze, that one must also put finger to keyboard to comment on the loss of Evángelos Odysséas Papathanassíou, better known as “Vangelis” on May 17th. Like his colleague of electronic music of the same vintage, Vangelis had a prodigious and notable output dating back at least as far as Aphrodite’s Child in 1967, which Vangelis formed with Demis Roussos, famous for the single “Rain and Tears” derived from Pachelbel’s Canon in D major, and one of the most impressive progressive-psychedelic rock albums, “666” (1972). Even in this period, Vangelis began engaging in solo work writing experimental and film scores for film, for which he would become famous. His first solo album was “Fais que ton rêve soit plus long que la Nuit” (1972), a sound collage of the May 1968 events in France (Aphrodite’s Child was stuck in Paris at the time), and the first film score “L’Apocalypse des animaux” (1973), the two being quite suggestive of where his political loyalties lay.

The two albums “Earth” (1973) and “Heaven & Hell” (1975) firmly established Vangelis on his solo path, especially the latter where he departed from a progressive sound to one of synthesized classics which, in this author’s considered opinion, reached a superb highpoint with “Opéra Sauvage” (1979). Mention must also be of “China” (1979) which included significant Chinese instrumentation which was somewhat unknown to the occidental ear at the time. Also of special note is symphonic and classical “Mask” (1985) (not to be confused with the Bauhaus album of the same name of course, although a Bauhaus-Vangelis fusion would have been interesting), and the experimental and acclaimed album “Invisible Connections” (1985), which had a curious pressing error where the two sides were reversed.

In addition, there was the collaboration with high-octave vocalist Jon Anderson, previously of Yes. Vangelis had been previously considered as a replacement for Rick Wakeman in the mid-70s, but Anderson did some vocal work with Vangelis on some of the pieces in the years that followed, notably the harp on Opéra Sauvage. Four albums came out from their collaboration with some very successful singles, “I Hear You Now” from Short Stories (1980) and “I’ll Find My Way Home” from The Friends of Mr. Cairo (1981), with a characteristic dreamy synth-pop. The album, The Friends of Mr. Cairo, is notable for its exceptional 12-minute tribute to detective, gangster, and romance film noir.

However, Vangelis was most famous for his film and television compositions, especially for Chariots of Fire (1981), the SF-noir Blade Runner (1982), the haunting sounds of Missing (1982), the orchestral brooding and ominous in 1492: Conquest of Paradise (1992), and the otherworldly music for Carl Sagan’s Cosmos (1980). From the score to 1492 Vangelis received an Echo Award as “International Artist Of The Year”, and RTL Golden Lion Award for the “Best Title Theme for a TV Film or a Series”. Nevertheless, Vangelis’ most famous piece is certainly the opening theme for Chariots of Fire, “Titles”, which has been subject to a number of amusing parodies and is still mistakingly referred to as “Chariots of Fire”, something that will certainly trigger exasperated Vangelis aficionados. “Chariots of Fire” is actually a twenty-minute epic ranging from gentle waves to crashing crescendos. As an entirely subjective representation and an indication of my reading habits of the time, as a teenager I would often fall asleep to this, dreaming of Tolkien’s Noldor Elves crossing from the Undying Lands to Middle Earth. I was that sort of teenager (well.. before I discovered punk rock).

In the 21st century, Vangelis found himself following on from his space exploration interests from Cosmos to work with both NASA and the ESA on a number of music projects. With NASA, this included the live performance and subsequent studio release of “Mythodea” (2001) for NASA’s Odyssey mission to Mars, which was launched that year. Mythodea combined several facets of Vangelis’ style, including the deep and militaristic sounds, along with the orchestral and choral presentations. For the ESA he composed some short pieces for the ESA’s Philae lander on Comet 67P in 2014, which would be elaborated and incorporated into the studio album “Rosetta” (2016), and in 2018 he composed the limited release “The Stephen Hawking Tribute” which was from the score for Stephen Hawking’s memorial; as Hawking’s ashes were interred at Westminster Abbey, the music with Hawking’s speaking was beamed by the ESA to the black hole, 1A 0620-00, which is the nearest to Earth. His final studio album was “Juno to Jupiter” (2021) inspired by NASA’s Juno space probe and orbital mission to Jupiter.

With an enormous range over more than five decades, it is difficult enough to give a summary of the career of Vangelis. His contributions have ranged from the highly notable, to the downright famous, and often provided a connection for those who felt that their life was either in the wilds or journeying into the vast expanse of space. Capturing all those in a range of musical styles and influences was certainly his art, and the mark he has left on musical history will certainly be lasting. For those who have been touched by the magnificent sounds of the electronic musician trio of the 1970s and 1980s, following Schulze and Vangelis – one can only ask – dear Jean-Michel Jarre, do not die this year – even if it makes aesthetic sense.