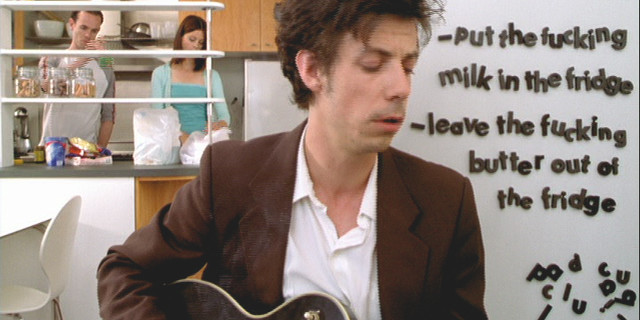 Lowenstein did it better with Dogs in Space.

Although the film has its moments and is worthwhile viewing for anyone who has lived in a share house, this film doesn’t quite make the grade.

The script is loosely (and I mean very loosely) based on the book by John Birmingham. Whereas the book was vaguely believeable, some of the scenes in this film stretch the tale a little to far. For instance the chainsaw wielding Nazi’s who chop the front of the house down seems a little far fetched (maybe I’ve just lived in the wrong sharehouses). And by the way, what was the girl with the ‘Class War’ t-shirt doing with the Skinheads anyway?

Noah Taylor tries his hardest to look like Nick Cave, and Sophie Lee plays herself.

There are a few enjoyable moments, but the film leaves one feeling fatigued by the half way mark and drags on for too long.

It looks like the rewrite of the story was to add some cohesion to the disparate elements of the novel. It sort of hangs together but not very well.

Initially I heard the film was no good, but David Stratton loved it, and convinced me to see it (plus I got a free ticket).

2 thoughts on “Review: He Died with a Felafel in His Hand”