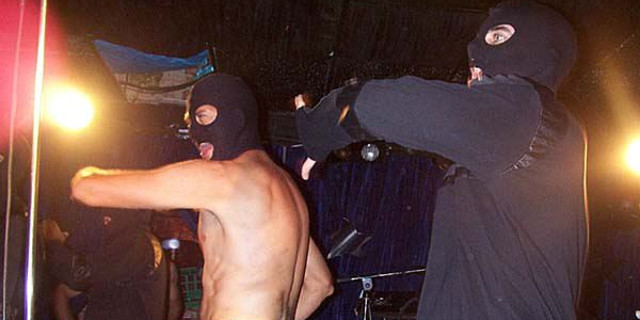 One week’s notice, twelve bucks, no pre-sales, venue of only 300 capacity. Yessss.

The Punters is having a month long fling of special gigs before closing on February 17. Still no word on what will replace the Punters Club, but its closure will certainly mean that I have no reason to go anywhere near Brunswick St ever again.

On Thursday night, TISM played a special farewell show and destroyed half the venue.

Punters at the Punters may be queuing up to sue TISM for causing siliconiosis after Ron pulled most of the roof above the stage down, showering us in fibreglass.

Supporting TISM is usually a painful experience consisting mostly of being abused by loyal TISM groupies, but the Fat Thing put in an entertaining performance of solid, unoriginal funk-metal. Fortunately they had stage presence coming out of their ears, and the audience treated them fairly well.

Because there’s no backstage worth speaking of at the Punters, TISM entered through the normal entrance. Costumes were the plain black raver gear that seems to be derigueur for secret and short-notice gigs (Perth the next day apparently got full balloon heads and canary yellow costumes).

It would be lousy to suggest that TISM are the AC/DC of alt.rock, but to a large extent you know just what you’re gonna get at a TISM show and this gig did not disappoint. The setlist was a satisfying combination of new stuff and classic rock, Humphrey went for a bar walk, people got naked, adoring and uncritical fans got jumped on repeatedly by Ron, and somehow this managed to look spontaneous even though it’s happened exactly this way at hundreds of other TISM gigs.

Basically, if I or anyone else at this gig wanted an intellectual challenge or musical sophistication, we’d go see the fucking Brodsky Quartet. We didn’t, and we were greatly entertained.