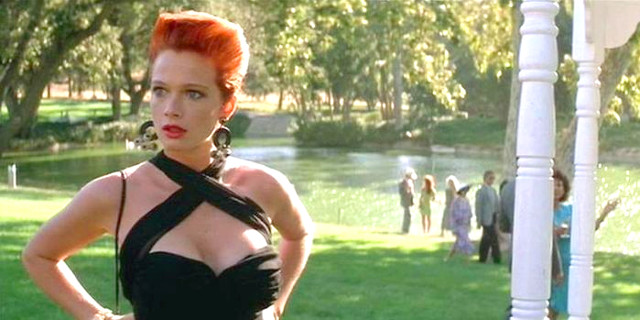 Must be movie week at Rocknerd. So I was reminded of The Adventures of Ford Fairlane (1990), a thoroughly enjoyable piece of cheese starring an asshole. With bonus Robert Englund, being frightening without the makeup. Here’s the review from Party Fears #12 (1991), p25:

THE ADVENTURES OF FORD FAIRLANE

Andrew Dice Clay is best known for being a racist, sexist, homophobic arsehole under the guise of “comedian”. “Hey, guys, it’s only a joke!” I wasn’t going to see this until a friend told me of how (i) Fairlane (Dice Clay) hates Australia and Australians, especially koalas and INXS (“Ain’t that the sorta place they use to test nuclear weapons on?”) and (ii) in the end, he gets the girl, the money and the koala. So how could I resist.

Ford Fairlane is a Rock’n’Roll Detective, working in Los Angeles. (His car is an early ’60s red and white two-door Fairlane convertible — cue screams of car-lust.) The script contains no racism and only one passing queer joke, and the sexism actually does work as being “in character”, but he grows out of it a bit. He remains strongly anti-cretin, however, and still says “fuck” every second word.

The plot is merely a basic functional detective plot; not even an honest mystery plot, just a wide-screen action comic book, though fine for what it is. The setting, however, is truly marvellous. I implore any of you who have the misfortune of being in the music industry, or even having suffered the unpleasantness of brushing close by, to see the bloody thing. It gets the business at the top end precisely right — plastic, utterly fake, lifeless, contrived … the only way they could have got it wrong would be underdoing it. (Apart from Hendrix, the soundtrack fits too … aaargh!) I’m not saying it’s Spinal Tap, but it does more than well enough to deserve attention.

Really cool bits abound — the exploding television; Ford lighting his cigarette near the end (heh heh); the funeral and especially the coffin; the death of the DJ (hanging’s too good for ’em!); the plastic pop star; the thugs looking like the Cult, or perhaps Fields of the Nephilim; the crook chewing up three compact discs …

Best of all, Andrew Dice Clay actually has a brain and a personality and could start making a decent living for himself.

(Now out on video and highly recommended.)

It won a near-sweep at the Razzies, but I maintain it wuz robbed. I’m rewatching it now and having a whale of a time. This movie is way more entertaining than it deserves to be. I recommend you track it down.

The movie was based on a series of short stories from ten years previously, which have just come out as a book. Throw some money at the author.