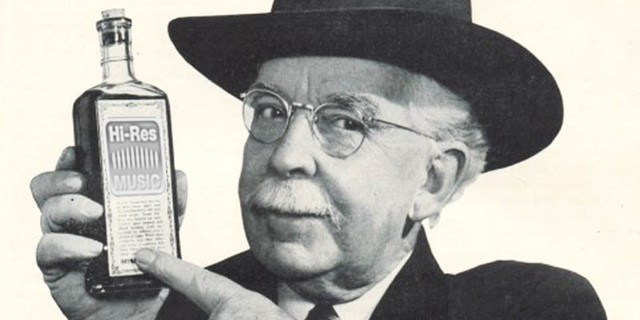 Master Quality Authenticated, or MQA, is an audacious innovation in the “high-resolution audio” field, in which record companies try to sell you your music again and audio equipment manufacturers try to sell you things that no human tested in the last century can hear.

Before anything else, we must stress yet again: high-resolution audio makes zero difference at best and causes intermodulation distortion at worst, and even the golden ears advocating this stuff can’t tell the difference from CD quality in A/B/X testing. Hi-res audio is completely made-up bullshit, and anyone trying to sell it to end consumers is committing fraud. The only advantage of hi-res audio is that it tends not to have LOUDNESS WARS mixes.

(24-bit audio — or 32-bit float, just because they can — is routine in recording, because it gives lots more room to mess around or run things through several hundred filters. There’s still no excuse for marketing it at a premium at the far end.)

The goal of this new format is, of course, a rent-seeking monopoly on high-resolution streams for Meridian, the creators of MQA. It’s patented to the hilt, and anyone touching any aspect of it will be required to pay licensing fees every step of the way — unlike Ogg Vorbis or FLAC, which were never patented, or MP3, which is recently patent-free.

MQA offers high-resolution audio with lossy compression. As far as I can work out (corrections welcomed), they take a 24-bit 96kHz stream and compress it into a 16-bit 48kHz stream. All audio from 24kHz to 48kHz is lossily compressed as one frequency band, which is then encoded in the dither of the bottom 3 bits of the 16/48 stream, leaving it effectively a 13-bit stream. There is also another 8-bit 48kHz stream which contains lossily compressed difference between the original 24/96 stream and the 16/48 output stream.

Their secret sauce is better psychoacoustics, though there’s a curious absence of A/B/X test results. (They did get one reviewer literally claiming that “it sounds convincingly better than the normal, non-MQA’d 24bit/96kHz file” that it was created from — meaning that he found MQA’s defects appealing.) They say you can get away with lossy compression because there’s not much energy in the 24–48kHz frequency range. Of course, in strict psychoacoustic terms, you could “compress” it to a single byte containing a zero, because no human tested in the last century can reproducibly hear frequencies over 20kHz. But they claim they are doing this sincerely and have actual data in there and patented innovations and so forth. You wouldn’t be giving them all this money for nothing, after all.

An MQA stream can be packaged as a FLAC, and decoded by anything that can play FLAC (which is everything these days). You can then decode further parts of the stream depending on bandwidth. Of course, the bottom 3 bits contain high-frequency quantised white noise, leaving playback as effectively 13-bit rather than 16-bit — that is, MQA degrades the audio stream if you’re not playing it back with the patented MQA decoder.

MQA has somehow given journalists the idea that it can “deliver files with the size of a typical MP3 download or stream”, which is clearly not going to happen. The precise claim I can find in their own words is “hi-res recordings delivered at just 20% the size of traditional formats” without further numbers — but even the audiophiles willing to entertain the possibility of superhuman hearing ranges aren’t impressed with its efficiency or results:

The Wikipedia article on MQA is champagne comedy, in which MQA tries to sell a 13-bit 48kHz stream with a couple of lossily compressed correction streams on top as high-resolution, and even other purveyors of audio woo call them out.

What Hi-Fi interview with Bob Stuart of Meridian, in which he inexplicably fails to detail the extensive A/B/X tests irrefutably demonstrating the superiority of MQA.

The RIAA is very into the idea of “Hi-Res MUSIC” — because they want you to buy your collection again — and is heavily pushing MQA in particular, for unclear reasons. RIAA Chief Technology Officer David Hughes says “If I’m in a car and I play an MQA file, it will sound better than an MP3”, as if absolutely anything since 1995 doesn’t sound better than an MP3, e.g. a FLAC in 16/44 CD quality.

Apple Music has shown no signs of caring about even CD-quality streaming, let alone hi-res (despite collecting 24-bit masters for a few years now) and Spotify not much. Tidal has offered MQA on their hi-res tier since January this year, labeling it 24/96 even though it isn’t; there is as yet no data on whether either end user can tell the difference. A cloud of minor download and streaming services have been selling MQAs since last year.

Expect the labels to push this hard. Warner Music signed on last May, Universal in February and Sony and Merlin just this month. There’s a lack of visible product as yet, but Meridian did recruit the CEO of MQA from Warner.

It’s worth reiterating that convenience beats quality, every time. Spotify has become the record industry’s 2017 very best friend while pumping out everything as MP3 and Ogg. On modern pop music, people have trouble telling 16-bit sound from 8-bit sound.