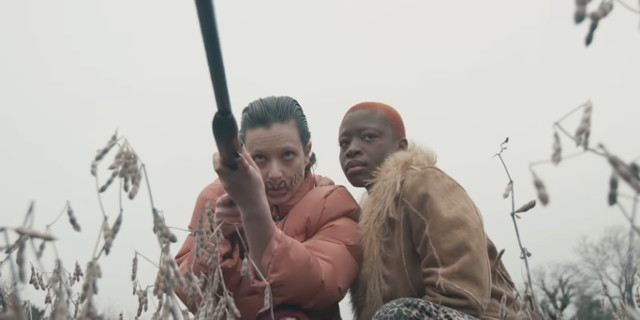 I predicted in February that Careful by Boy Harsher would be the best album of 2019 — and I was correct. “LA” is my jam.

“I am a lesbian and can confirm that 2:12 is a realistic example of foreplay”

(Rose hates this song more than words can say, and cringes every time it starts.)

As well as the complete works of Boy Harsher, I’ve been playing way too much Mind In A Box. They’re bleepy industrial EBM pop, and pretty catchy. Not quite top-ten material — a bit much fondness for 48-bar verses — but “8 Bits” somehow kept me hitting repeat.

I went to two live shows last year: the “Crypto” “Rave” in February — and Orchestral Manoeuvres In The Dark’s 40th Anniversary Tour in November!

I missed Severed Heads’ final London visit in July. I could have made it, too. Dammit.

OMD was a trip. It was an Old People’s Concert, and I am definitely the old people now. OMD are still making new music, and it actually sells and is good, and they play it live and it’s still good. I went with my dear friend Tonnvane, who had a spare ticket. We were in the standing section, which is inadvisable if you’re our age. OMD took care to call the venue the Hammersmith Odeon.

Tonnvane writes and puts on plays — in London theatre, she’s one of the people the money comes from. Space Age Love Songs was one of the best things ever, and I never did get around to reviewing it when it could have done it some good. It’s about gays and new wavers in 1983, but it applies to every indie head reading this. We build our cities from the rubble around us. By hand, brick by brick. It’s hard. But there’s no other way. I really wish this could get another run, because the material and the acting are 100%, and it just didn’t manage the magic of publicity. Tonnvane has considered renaming it Drag Queens in Space, just to get attention.

For the past thirty-five years, I’ve thought the best thing for music and musicians would be for the music companies to die in holy hellfire — and I keep being proven correct.

Artistic creation is overwhelmingly a process of reworking other people’s old stuff. Eternal and ever-expanding copyrights are now hobbling the pop industry — you incredible fucking idiots, you’ve fucked yourselves and everyone else. Well fucking done. Please just finally destroy each other.

The shining light of old stuff is Andrew Hickey‘s stupendously awesome podcast, A History Of Rock Music In 500 Songs. Which will be more like a thousand songs by the time it finishes, in twenty years. It’ll also be a series of books, the first of which is out now — From Savoy Stompers to Clock Rockers (UK, US). I can’t tell you how much you need to download all of these — and sign up for his Patreon, so you can get the weekly bonus episodes.

2 thoughts on “2019 in music: your comprehensive and reliable global guide.”